Taylormade drivers are hugely popular for their advanced technology that improves trajectory and distance. After all, this brand, one of the top ones in golf, invests large sums of money into research and development. And all of this is done so that golfers, be it high-handicappers, beginners, seniors, etc., can reach their maximum potential irrespective of common errors.

So it’s no surprise to come across the best Taylormade irons as well. But with irons, the setup should be just right. Only then can you open the door to distance control, accuracy, and even confidence on the golf course. Also, irons, unlike drivers, are available in a wide range of options. Meaning golf irons come in various types and formats.

Let’s explore these kinds of clubs below! 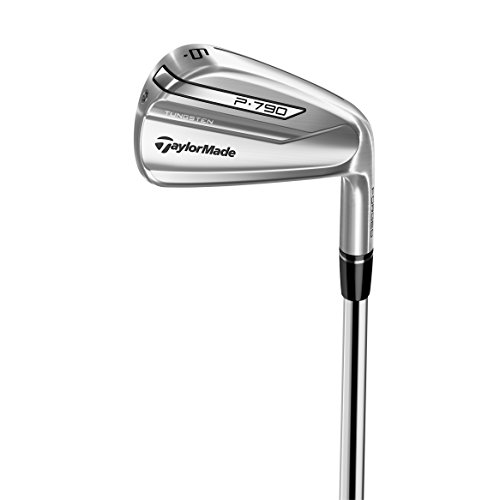 A brand that understands the fact that not every golfer is the same is surely a brand you can rely on. TaylorMade has crafted a very forgiving iron set, the P790. Each iron here has an incredibly generous sweet spot. The lightweight design and exceptional combination of response and feel are the most cherishable factors.

You can easily hit the golf ball farther out and also learn to fade and draw in a much more comfortable manner. All thanks to SpeedFoam, which is responsible for generating groundbreaking distance above all else.

You know these TaylorMade golf clubs are simply amazing because of their great control and feel. The M6 is very popular for its Speed Bridge technology, which makes it an exceptional choice in the category of game-improvement irons.

Speed Bridge is also responsible for minimizing low-frequency vibrations. And that means the perfect satisfying sound at impact. Moreover, an advanced HYBRAR compression damper is also included for filtering out unwanted vibrations, so the feel of the irons remains solid and soft through and through. 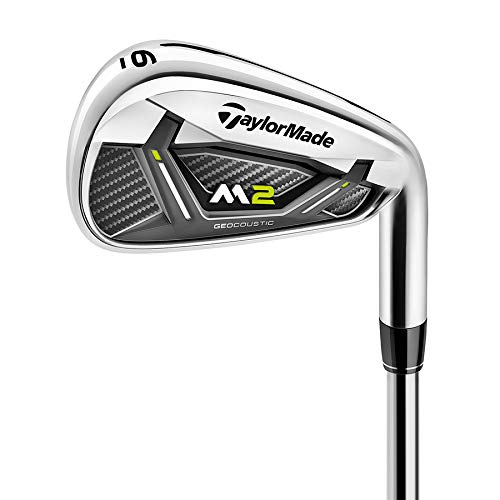 Now the M2 golf irons by TaylorMade are also great clubs for getting just the feel you demand, irrespective of your skill-set on the course. Compared to your older golf clubs, these are likely to be lighter for boosting distance by at least 7 to 10 yards. And with the 8-iron, you can achieve a distance of even 135 to 140 yards.

Geocoustic engineering is a part of this wonder-set, which delivers a combination of optimal acoustic management and geometric shaping. In simple words, an enhanced feel and sound.

The M2 irons, no doubt, preserve ball speed even in the case of shots struck from the toe or heel. 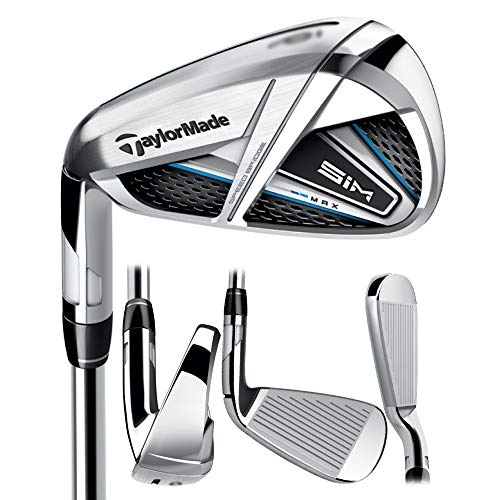 A solid investment for casual golfers who want to get their hands on the most forgiving game-improvement irons. SIM MAX features not only SpeedBridge to unlock maximum distance potential while enhancing feel and sound. It’s also equipped with an ECHO Damping System that enhances the feel without compromising face flexibility.

They do require a little getting used to. But once you fix your swing and position of the golf ball in your stance, the SIM MAX irons are found to be extremely forgiving. 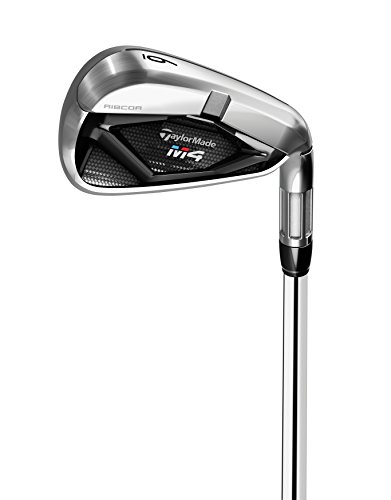 Who doesn’t want to buy golf irons that improve performance on the course, right? But not everyone is willing to work on their swing at the same time. But if you’re a committed player, then you can and should buy TaylorMade M4, even though expensive.

With an improved, soft swing, these irons crush the golf ball 100 yards pretty easily. That’s the kind of generous power packed in them. And what else can you expect when the TaylorMade golf club features RIBCOR! It transfers greater energy into the ball for boosting both accuracy and distance. 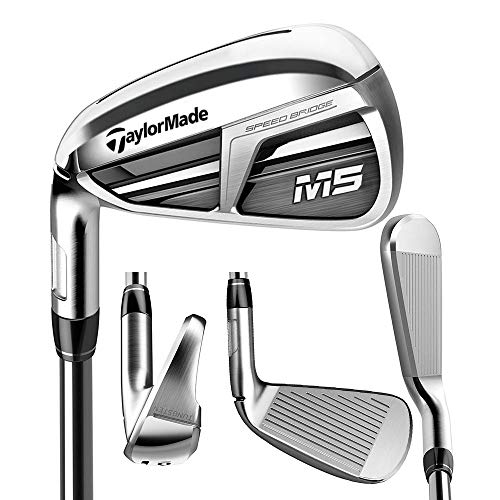 A golf handicap between 10 and 15 is considered to be above average, and even standard. So if that’s the kind of golfer you are, you’re sure to appreciate the engineering of TaylorMade M5. These irons, without the shadow of a doubt, are straight and long. And this applies to off-center strikes as well. 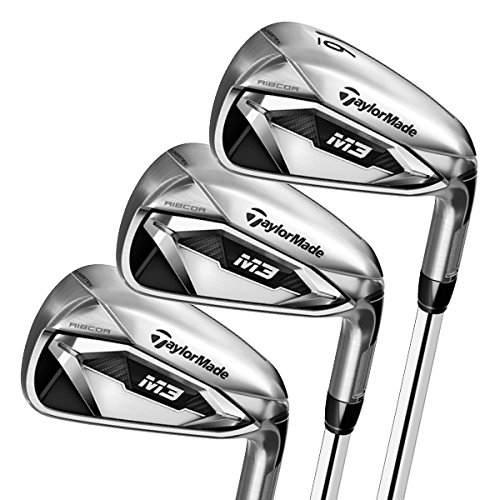 Just like M4, M3 also features RIBCOR for transferring more energy into the golf ball to make way for increased forgiveness and distance. But in comparison to M4 and M5, these are certainly a slightly inferior choice yet they’re a huge steal in terms of the reduced price.

When you can achieve optimal turf interaction as well as a cleaner address view because of the improved shaping of these TaylorMade irons, nothing else is bound to matter. 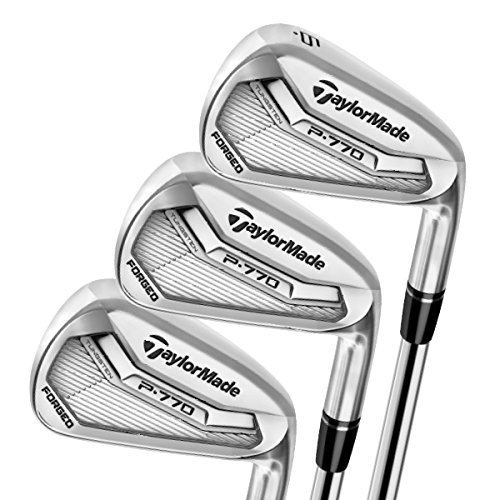 The P770 iron set by TaylorMade is engineered for low-handicap to mid-handicap golfers. You can work the ball right or left very easily with these irons. Touring professionals simply love the playability, control, and precision here. Even the extensive feedback that skilled golfers possess lays the groundwork for such irons.

With a thin topline, minimal offset, compact blade shape, forged construction, and soft carbon steel, factors like acoustics, feel, control, and the like are admirable.

Even though not a part of our top golf irons specifically crafted for women, TaylorMade Kalea is one of the most lightweight and easiest to hit. And why wouldn’t that be the case when ultra-lightweight SpeedPocket and shaft work in conjunction for increasing ball speed and launch. This, in turn and no doubt, results in a longer carry distance.

Every club is equipped with optimized length, loft, and weight to ensure optimal gapping between the golf clubs. On top of that, there’s the deep, low CG, as is the case with most Taylormade and even the best women’s irons. So you can get the golf ball up into the air more easily. 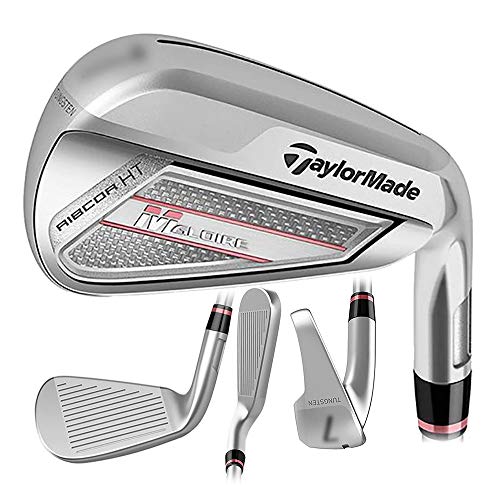 Not so different from the previous ladies-specific irons, these TaylorMade golf clubs also pave the way for next-level performance. With RIBCOR and massive tungsten weighting, the brand has optimized sound, flexibility, and launch across the entire clubface, which means forgiveness is the highlight of the show.

And since most women golfers have a comparatively slower swing speed than men, the lighter, larger clubhead is perfect for making up for the lack of speed. 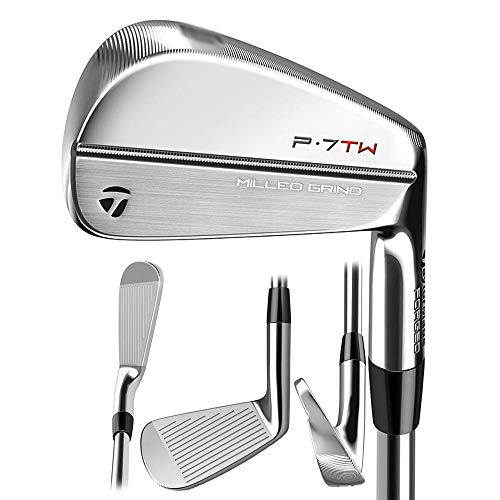 These are precision-engineered golf irons made of premium materials that are carefully crafted to celebrate the partnership between TaylorMade and Tiger Woods.

Every P7TW iron is meticulously shaped indeed with a thinner topline, longer blade length, and progressive face height. In short, the most advantageous Tiger Wood fingerprint. 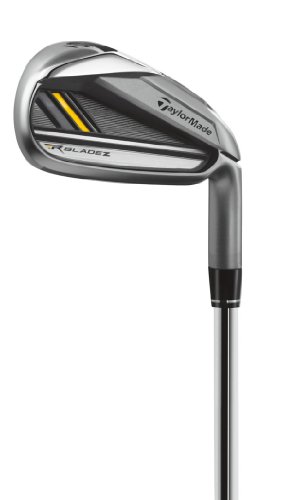 What’s so special about the last option on the list? That TaylorMade Rocketbladez makes hitting longer irons much more effortless. You can achieve a good amount of extra distance very easily. It’s the most useful set to have at your disposal from 90 yards in and for chipping around the green.

The progressive offset, in particular, is the most appreciable because what it does is promote a square clubface at impact, thus generating straighter shots.

We strongly believe that TaylorMade irons, even though the selection is comparatively more limited than other brands, serve the purpose they are created for. These irons get the job done while also being both high-quality and less expensive.

Be it irons, drivers, or even putters, TaylorMade produces some of the best and also industry-leading golf clubs. You come across any article that consists of golf club reviews, and almost every such post has at least one TaylorMade creation.

What TaylorMade Golf Irons Do Pros Use?

Firstly, here are some of the names of professional golfers who opt for TaylorMade. The list includes Tiger Woods, Jason Day, Sierra Brooks, Rickie Fowler, Sung Hyun Park, Dustin Johnson, among many others.

As for what TaylorMade irons are the most commonly used by Tour-level players, the models are TaylorMade P790, TaylorMade SIM MAX, TaylorMade M5, and TaylorMade M6. And we’ve reviewed all of these, just so you know.

What TaylorMade Golf Irons Are the Most Forgiving?

Beginners, high-handicappers, and even seniors don’t have to worry because we’ve also shortlisted the most forgiving irons. Hands down, these are TaylorMade M2, TaylorMade M4, and TaylorMade M6.

What Is the Most Suitable TaylorMade Iron for High-Handicappers?

As a high-handicap golfer, you tend to prioritize launch and distance along with a decent level of workability, correct? So the TaylorMade iron that fits the bill is the M2. Its redesigned SpeedPocket and thinner wall produce a higher launch while also boosting ball speed consistently, even on mis-hits.

What Is the Most Suitable TaylorMade Iron for Mid-Handicappers?

We’ve listed the TaylorMade M6 irons, which are the best for the mid-handicap level simply because these offer both great feel and control. With SpeedBridge and SpeedPocket, they improve the sound, feel, and distance.

What Is the Most Suitable TaylorMade Iron for Beginners?

These have time and again have been TaylorMade SIM MAX and TaylorMade M2 irons. Both are outfitted with features like ultra-low CG, SpeedBridge, and SpeedPocket that make them the most forgiving in order to unlock your maximum distance potential.

So, as a beginner, your slow swing speed doesn’t hinder the success of your shots. And that is why they’re a part of our top recommendations.

What Is the Most Suitable TaylorMade Iron for Average Golfers?

The TaylorMade M2 Iron Set is the best for an average golfer. What with its Geocoustic engineering, lower CG, and, once again, SpeedPocket technology. All, by the way, combine to deliver just the sound, feel, launch angle, and ball speed average-level players demand.

One simply cannot undermine or downplay the high-performance level of TaylorMade irons. In fact, of ALL Taylormade irons, because each one is built with a set of technologically advanced features that are more or less similar across all models. No doubt, some are better suited for more skilled players while the others are designed to grant more forgiveness to beginners.

Also, you can decide which TaylorMade golf iron you want depending on your budget or how often you play golf. Whatever the case, upgrading to TaylorMade certainly makes way for longer distances with greater forgiveness.